Over 400 years ago, in November 1595, a Spanish galleon, the San Agustín, was journeying along Marin's rocky coastline in stormy weather and sank off Point Reyes near Drake's Bay.

The ship was one of the fabled Manila Galleons that sailed for Spain between the Philippines and New Spain (Mexico) from 1565 to 1815. Miraculously, some 70 survivors, guided by Captain Sebastian Rodriguez Cermeño, sailed some 1500 miles back to Mexico in a small launch and lived to tell the tale. The shipwreck, which has never been excavated, now lies within the Drake’s Bay Historic and Archaeological District and was designated a National Historic Landmark by the U.S Department of Interior in October 2012.

The San Agustín is the subject of a new KQED television documentary by Marin County resident George Thelen, airing at 11PM Wednesday, January 22. The film, titled "The San Agustín: California Shipwreck", highlights the crew's epic journey and celebrates the wreck site’s status as one of the oldest known and most historically significant shipwrecks on the west coast.

Thelen is a freelance content producer who recently led the creation of the Marin History Museum’s award-winning mobile application and audio documentary series. The program will air again on Sunday, January 26, at 3PM on KQED.

With its long and hazardous shoreline, Marin has a number of other significant shipwreck sites, including the Tennessee off of the Marin headlands. Part of the Pacific Mail fleet carrying both passengers and freight between Panama and San Francisco, the Tennessee became the first American steamship to be disrupted in her regular service for the California Gold Rush.

Steaming toward the Golden Gate on the morning of March 6, 1853, Captain Edward Mellus was unaware of the outgoing tide's strong current sweeping his paddle-wheeled steamship north past the Gate and along the Marin shore.

At 9:00AM, the ship's lookout sighted breakers and the captain ordered the engines reversed, but was forced to beach the ship. By March 21, 1853, the Tennessee had disintegrated into the surf, leaving only her name to mark the site of the wreck at Tennessee Cove. The remains of the Tennessee are listed on the National Register of Historic Places.

Other Marin shipwrecks include the San Rafael (1901), a Marin ferry that collided with another ferry; the City of Rio de Janeiro (1901) under the Golden Gate; the Duxbury (1849) off a reef near Bolinas; the Ayacucho (1841) at Limantour Beach (named the ship's French Captain, Jose Yves Limantour); the Oregon (1858) off Point Reyes; the Warrior Queen (1874) off 10 Mile Beach Point Reyes; and the Francois Coppee (1903), off Bird Rock at the northern end of Point Reyes peninsula. 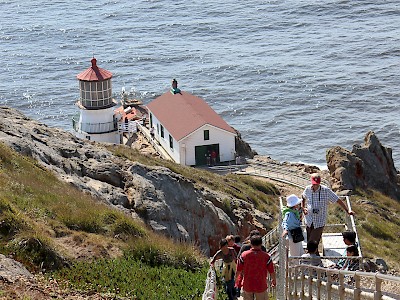 With current conditions, there is currently not full access to the park.  Please refer here for updated information.

Next: Explore This Frank Lloyd Wright Masterpiece in Marin »