Movies You Never Knew Were Filmed in Marin

Posted in Blogging Marin on Monday, May 4, 2020 by MCVB Staff

Calling all Star Wars fans! Did you know that Lucasfilm/SkywalkerSound, the company that produced Star Wars: Episode VII - The Force Awakens, is actually headquartered in Marin County? In fact, there are quite a few big blockbuster hits filmed here as well, and as you’ll notice from our list, many are fast-paced science-fiction movies and classic cult movies. Here are our favorites.

Woody Allen has a knack for bringing creative plots and quirky characters to the big screen, and one of his more recent films, Blue Jasmine, is the perfect example. Starring the talented Cate Blanchett and Alec Baldwin, viewers can spot a few Marin locations throughout the film, including the Headlands Center for the Arts, a mansion in Belvedere and the Larkspur Escalle Winery, plus some areas in and around Tiburon.

This is where Ethan Hawke and Uma Thurman met - filming Gattaca in Marin's Frank Lloyd Wright-designed Civic Center. With a star-studded cast including Gore Vidal, Jude Law and Danny DeVito to name a few, Gattaca was Oscar-nominated for Art Direction and Best Set Decoration. Those were the days!

Francis Ford Coppola's Academy Award-winning film The Godfather is a classic adored by movie-watchers both young and old. Although the location is meant to be New Hampshire, the scene in which Kay Adams and Michael Corleone, played by Diane Keaton and Al Pacino, respectively, reconcile was really shot in Ross. Quite the stunning backdrop for such a heavy scene.

A year later, American Graffiti hit theaters, and while it might not be obvious, there are a few scenes where Marin takes center stage. First, the street scene was filmed along San Rafael's Fourth Street. Then there are the sock-hop dance scenes that were filmed at Mill Valley's Tamalpais High School. The movie also featured other Northern California cities and counties like San Francisco, Berkeley and Sonoma, so keep an eye out!

Who could forget watching Harrison Ford conquer challenge after challenge in the Indiana Jones series? In this case, the movie's visual effects were produced at Industrial Light & Magic, now 32TEN Studios in Marin County. There are a couple of other scenes filmed in the area as well, including Nicasio, shown at the end of the movie when Indiana Jones returns to the Indian Village, and also Fairfax.

For such a scary movie, it's surprising that so many of Northern California's prettiest towns made the cut. One of the houses depicted during the film is located on the hill right across from Tomales High School and another house was filmed on Tomales Road. It’s easy to miss if you’re watching the movie for the first time, especially if you’re too wrapped up in the mystery to notice.

No one can deny that Basic Instinct, starring Michael Douglas and Sharon Stone, has some pretty epic scenes, and none are more epic than the infamous car chase scene. The next time you watch this classic, take a closer look and you might notice that the car is driving from Mill Valley to Muir Beach on Highway 1. A few other scenes show Marin Headlands and Stinson Beach.

Muir Woods Park makes a cameo in the Rise of the Planet of the Apes. In the fictional tales, the apes have made Muir Woods their home, even though the film was actually shot in British Columbia. The Muir Woods National Monument, perhaps better known simply as the Redwood Forest, spans 12 miles north of San Francisco in Marin County. The monument is also the setting for Dawn of the Planet of the Apes (2014).

Considering how many science-fiction thrillers have made our list, it comes as no surprise that Star Trek IV: The Voyage Home is among movies partly filmed in Marin. There are a few backdrops you might recognize, including Marin Headlands and Novato. Most notably, the College of Marin's swimming pool makes a cameo, as does Novato's Fireman's Fund building.

For all you need to plan your Marin County vacation, visit the Marin Convention & Visitors Bureau’s website or Facebook page. 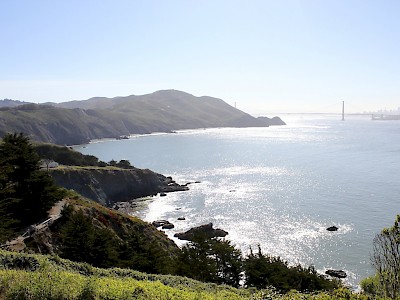 Visit Our Vibrant Downtown.  Our eclectic downtown business and shopping district runs the length of Fourth Street and its side streets.  Come experience it, Downtown to the West End. A...[Learn More]

This year, the existing parking lot has been re-aligned to allow the Redwood Creek channel to be connected to its natural floodplain. Muir...[Learn More] 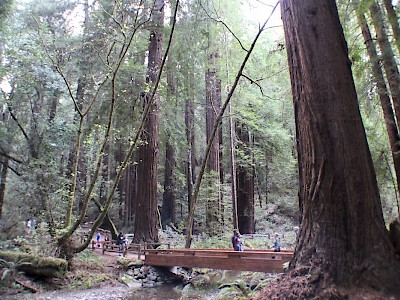