The Untold Story of the First U.S. Rock Festival 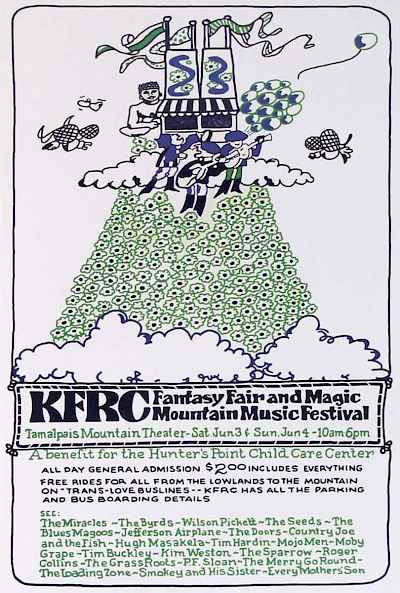 Flash back to June 10th and 11th, 1967 — one week before the Monterey Pop Festival and two years before Woodstock — tens of thousands of Bay Area music fans converged on the Sydney B. Cushing Memorial Amphitheatre on Mount Tamalpais in Marin County, California, for the first U.S. rock festival. Conceived as a promotion for the KFRC 610 AM radio station, the Fantasy Fair and Magic Mountain Music Festival featured more than 30 acts, including the Doors, Jefferson Airplane, the Byrds and Captain Beefheart & the Magic Band, as well as a group of Hells Angels and an "acid doctor" to mitigate bad trips. Arguably, the festival was the true start of the Summer of Love, and this is its previously untold story. View the setlist of musicians for those two days.

Magic Mountain Music Festival and HAIR (In Concert)
Flash forward to June 10, 2017 - For ONE DAY ONLY, relive the magic of 1967's Summer of Love! It's the 50th anniversary of the first outdoor concert ever, and Mountain Play is celebrating by hosting an all-day outdoor music festival - to be headlined with a concert version of HAIR! 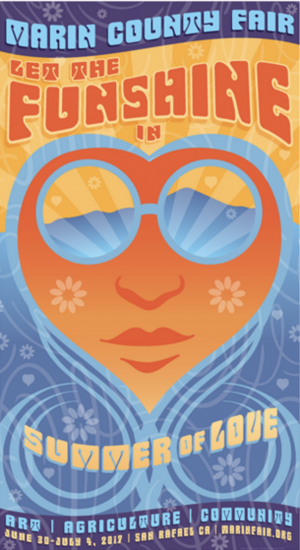 Marin Announces 2017 County Fair Theme
In a groovy tribute to the 50th anniversary of the Summer of Love, the Marin County Fair will have a far-out theme next summer: Let the Funshine In!

Italian Street Painting Marin
Returns to the streets of downtown San Rafael on June 24 & 25, 2017! Join them as they present The Summer of Love: An Art & Music Experience!

Next: Haunted in Marin »