Posted in Blogging Marin on Monday, October 22, 2018 by MCVB Staff

Sometimes when you need to get away from it all, it’s not how far you go; it’s just the feeling of getting away that makes it special. Located just north of San Francisco, Larkspur, with its world-class dining and turn-of-the-century feel, is the perfect example of a great escape close to home. Here are just a few reasons you should spend this weekend in Larkspur.

Larkspur’s vibrant, farm-to-table food scene is influenced by its proximity to San Francisco and the fresh resources along the ocean coast and from the northern farmlands.

Located in Larkspur’s Marin County Mart, Farmshop Marin is the perfect place to experience the farm-to-table culture. A wood-burning oven is at the heart of the operation, crisping handmade pizzas, roasting free-range chickens and baking wild-caught salmon. The staff here can tell you just as much about the food purveyors that source their meat, seafood, fruits and vegetables as they can about each entrée.

While you’re in the Marin County Mart, stop by the Rustic Bakery for an artisanal pastry to enjoy with your morning coffee. If you’re out shopping on Magnolia, in Larkspur’s Downtown District, you’ll also find a Rustic Bakery for afternoon treats, cappuccinos or deli-style salads and sandwiches. Whether enjoying breakfast or lunch, these handmade confections are a simple reminder: slow down and smell the pastries!

In the historic downtown area of Larkspur, Emporio Rulli is a quaint caffè, wine bar & pasticceria featuring a menu including Italian style pastries, cakes, gelato, coffees, sandwiches, soups and wines. They also provide Italian style cakes for any occasions such as weddings, birthdays or other special events. Aside from delicious treats, there is a variety of giftware including their own logo espresso & cappuccino cups, totes, local & imported Italian artisan ceramics and much more.

Larkspur’s Downtown District was officially listed on the National Register of Historic Places in 1982. While you stroll the main street in nostalgic contemplation, there are a few places you won’t want to miss during your Larkspur getaway.

The Larkspur Library is an understated hallmark of the community’s interest in preserving the past. The Lark Theater, built in 1936, has become the proud focus of the historic district. After renovations, the Lark Theater won several awards and became green certified by Marin County. Today, the theater is run by its namesake nonprofit and features independent films.

Located opposite the Larkspur Ferry Terminal, Remillard’s Brickyard Kiln is a state historical landmark and a unique bit of San Francisco history located in Larkspur. The Green Brea Brick Kiln is the only surviving structure of the Remillard Brick Company, a fiery powerhouse during the 19th and 20th centuries. Most notably, this brickyard helped rebuild San Francisco after the earthquake in 1906.

Larkspur’s intimate setting makes getting from here to there incredibly easy. For visitors interested in traveling to or from San Francisco, there’s no better place to stay in Marin County.

The Golden Gate Ferry Terminal in Larkspur Landing is close to several unique features of Larkspur, including great views of the Golden Gate Bridge and Mount Tamalpais on the walking trails inside Remillard Park, and the Larkspur Landing Shopping Center, which offers outdoor dining and live music during the summer.

If you’re headed to San Francisco, the ferry takes about an hour and will drop you off at the city’s famous Ferry Building, located along the Embarcadero. The Ferry Building features a wide array of shopping and dining options as well as the Ferry Plaza Farmers Market held every Tuesday, Thursday and Saturday. Once you get to the Ferry Building, you’ll have easy access to the BART or MUNI to help get you around the city.

Larkspur is more than a destination; it’s a feeling you won’t soon forget while dining at fresh local restaurants or enjoying beautiful historical sites. Larkspur has all the charm of small-town America within arm’s reach of the city. 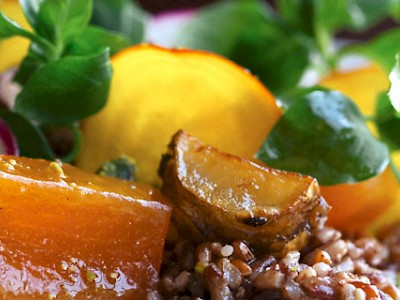 Located in the Marin Country Mart, Farmshop Marin is a culinary beacon on the bay sitting a stone's throw from the Larkspur Landing ferry dock offering up a...[Learn More]

Next: A Weekend in Corte Madera: Majestic Natural Attractions and Chic Shopping »