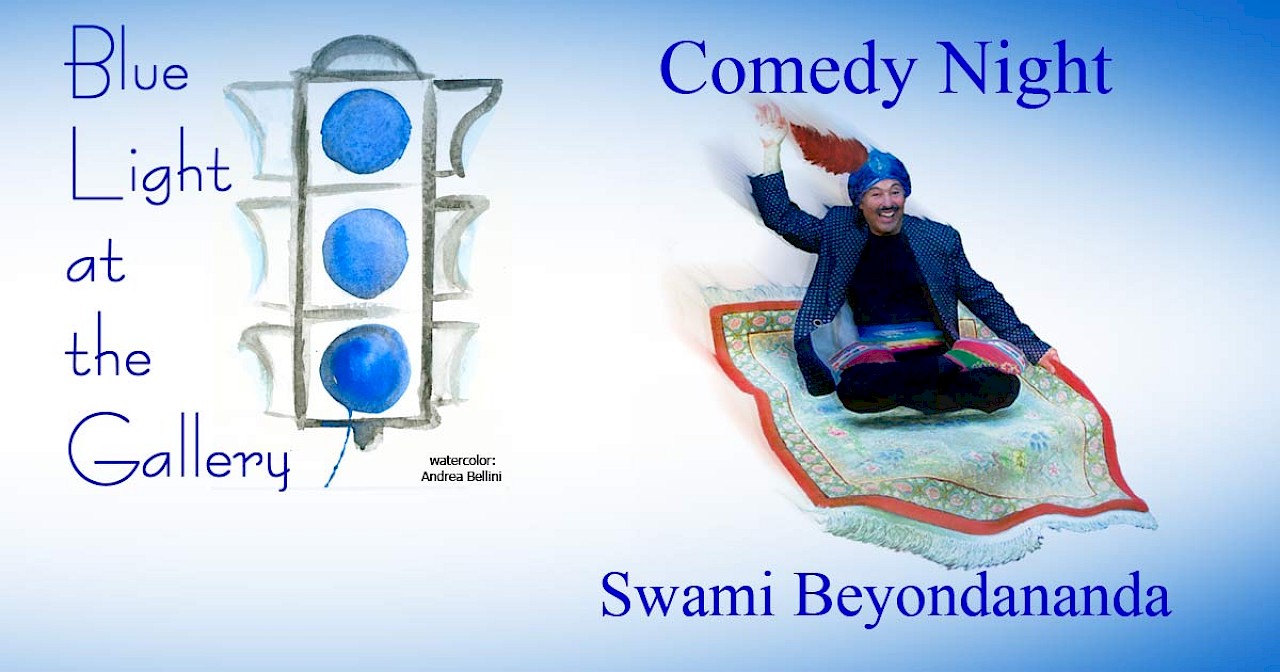 You are invited to An evening with Swami Beyondananda: Beyondananda and Beyond – An Evening of Cosmic Comedy and "Inciteful" Insight at Marin Society of Artists! In these serious times – where there's definitely something funny going on – laughter keeps us sane.  This heart-opening, mind-expanding, funny and insightful comedy set will help you wake up laughing -- and provide plenty of "aha's" in the wake of the ha-ha's. For more than 30 years, Steve Bhaerman, in the guise of Swami Beyondananda, has been a fount of comedy disguised as wisdom – or is it wisdom disguised as comedy?

Billed as "one of the biggest names in comedy" ("Beyondananda" alone has 12 letters), Swami keeps the audience in hysterics with his mixture of word play, seriously funny political and spiritual commentary, and playful silliness. He's the only guru to channel both Elvis AND Bullwinkle – and at the same time yet!  And ... unlike so many spiritual teachers who expect to be followed without questioning, the Swami invites questions from the audience.  If you have an answerable question for the Swami, he will have a questionable answer for you!

In part two of the program, you'll have a chance to meet Swami's alter ego, Steve Bhaerman. In addition to being a funny guy in his own right, Steve has also authored a "serious" book with cellular biologist Bruce Lipton.  Spontaneous Evolution: Our Positive Future and a Way to Get There From Here, has been translated into 26 languages, and has been called "world-changing" by both Deepak Chopra and political commentator Thom Hartmann.  If you're curious about how one becomes a cosmic comic swami, or the ins and outs of transformational comedy, you'll have a chance to sit down with Steve and ask him questions as well.  You'll laugh ... you'll learn ... you'll laugh again.


Tickets: $20 at the door. To reserve your seat (open seating), send an email to GeishaPoet@aol.com. (MSA Gallery Members get a $5 discount.)
Sweet & Savory potluck at the break. You are welcome to bring a treat or beverage to share. (No alcohol, a request of the MSA Gallery.)

Marin Society of Artists Gallery is located at 1515 3rd Street, San Rafael, CA 94903. This is a fragrance free event so people with allergies and asthma can attend.

« Previous: Best Cheese and Wine of 2019 Class at The Cheese School of San Francisco